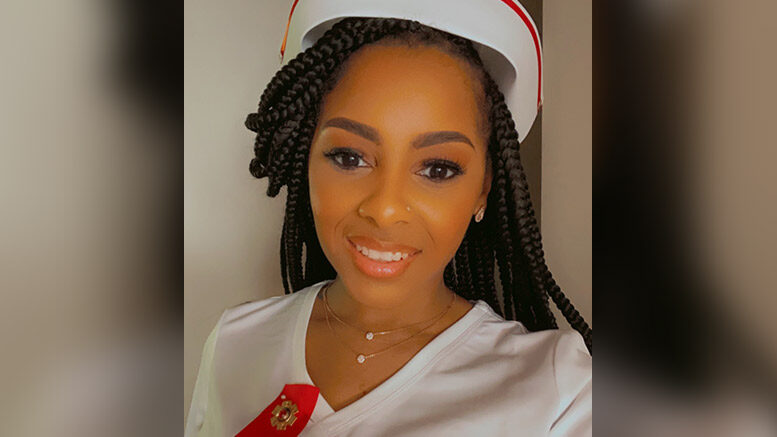 As a child, Jessica Jordan had no idea what she wanted to be when she grew up. During high school, she joined JROTC and when she graduated, she figured she would do what so many people in her family had always done and joined the Air Force, spending eight years serving her country. “I loved my time in the service, but I was a single mother and having to deploy and leave my daughter behind for six to eight months was not how I envisioned raising my child, so I decided that I would not to reenlist,” says Jessica.

“My experience as a student was great. I started right when the pandemic happened, so we began virtually and it was such a dramatic change for everyone, but we pushed through. We eventually were able to come on campus and everyone was so supportive.”

Like many who’ve joined the military, Jessica has a strong sense of duty, a desire to serve others. “When I got out of the military, I had to finally decide what I wanted to be when I grew up,” she says. “I decided to go to school and become a Registered Medical Assistant. After graduating, I moved to South Carolina and worked at Sweet Grass Pediatrics. After working there for a few years, my family and the doctors that I worked with pushed me to become better, they wanted me to be more and to do more. I had a conversation with one of the doctors that I worked with and she mentioned ECPI University. So, I called and made an appointment for the TEAS exam, took it, enrolled in the Licensed Practical Nursing Program, and here I am having just received my nursing pin!

“My experience as a student was great. I started right when the pandemic happened, so we began virtually and it was such a dramatic change for everyone, but we pushed through. We eventually were able to come on campus and everyone was so supportive.”

Jessica attended one of the Charleston campus job fairs and ended up accepting an offer at the Medical University of South Carolina’s Children’s Specialty Clinic. Now, she wants to come back to ECPI University to enroll in the ADN program to become a Registered Nurse. She says it’s not easy being a single mother, working, and going to school at the same time, but it’s worth it. “Never give up, no matter how hard it may seem,” she says. “Just keep pushing and keep your head held high.”

Sailor Earns a Degree and Commission, Then Finds Purpose