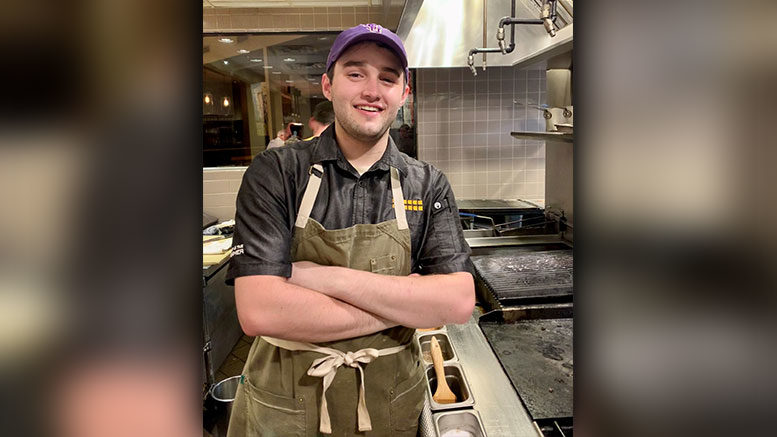 There are people who have always known what they were meant to do. Kyle Hobbs is one of those fortunate souls. “I come from a very food-oriented family,” he says. “As far back as I can remember, we were always traveling and trying new restaurants and new types of food.”

Kyle gravitated to the kitchen at an early age and soon began entering chili cook-offs in his rural community of Gates County, North Carolina. In high school, he began working in a pizza parlor. He’s been working in restaurants ever since. However, that was not all that long ago. For Kyle, high school was just a few years back. He graduated in 2016 and a couple months later was enrolled at ECPI University’s College of Culinary Arts, Culinary Institute of Virginia (CIV).

From the moment he arrived on campus, Kyle knew he had made a good decision. He was in his element. “It was a fantastic learning experience,” he says. “It’s a family-like atmosphere and there are many friends I made there that I am still very close to.”  When it came time to pick a restaurant for his externship, Kyle already knew where he wanted to be. He and his family had always enjoyed Harper’s Table, a fine dining, Southern-style restaurant in Suffolk, Virginia. Kyle impressed everyone there, just as he did the faculty at CIV and was offered a full-time position after graduation.

In May, Kyle was offered a position as sauté chef at the Chef & The Farmer, a progressive eatery in Kinston, North Carolina owned by famed Chef Vivian Howard, a restaurateur, author, and television host. She and her husband opened the farm-to-fork establishment in 2006 as a way to help turn some of Eastern Carolina’s displaced tobacco farmers into food farmers. Since then, the Chef & The Farmer has been featured in countless magazines and TV shows. Chef Howard has even won a Daytime Emmy and Peabody Award.

All of this is to say that being offered a job at this kind of restaurant is a pretty big deal. “I love what we do,” says Kyle. “On one hand, we do offer Southern cooking, but in a way few could imagine, fusing it with foods and traditions in places as far-flung as Italy, India, and the Middle East.”

So what’s next for Kyle? He says he wants to stay put for a little while. “The executive chef here is amazing and has serious connections in some of the nation’s leading food destinations,” he says. At some point, this self-described country boy says he will be ready to move on to a big city like New York, San Francisco or Atlanta. After that, he wants to go small again and start his own restaurant in Asheville, North Carolina. He certainly has a game plan, but then again, what would one expect from someone who’s always known what he’s wanted to do?